Monday saw players, who have reached a certain age, stepping onto the tee to compete in the Seniors and Veterans competition. There were some great scores posted with Janet Hardie and Annie Leitch both on 68 net which Janet won on the BIH. However, Annie met the Veterans criteria and consequently won the Veterans Trophy.
Well done ladies!

The fine weather obviously suits Janet Hardie as once again she topped the leader board in Tuesday’s medal with another excellent score of 68 net. Meg Laidler was second with 69 net and Jennifer Bryans 3rd with 70 net. Well done!

Harburn’s Midway team are back on the winning track after last night’s home match against Bathgate. The team of Elaine Wilson, Helen Warnock, Deirdre Taylor and Annie Leitch had a convincing 3.5 – 0.5 win over Bathgate. Well done everyone!

Morning All
Only in Scotland could you be golfing in glorious sunshine in the afternoon, then play in the early evening and find the 7th green covered in hailstones!

The sunshine certainly suited Jennifer Bryans as she had an excellent 74-4=70 (coming back in 34) to win the July Spoon competition. Cynthia Tuckerman was runner up with 71 net. Helen Warnock pipped Elaine Wilson on the BIH to snatch 3rd place on 72 net, and a spot in September’s Spoon Final. 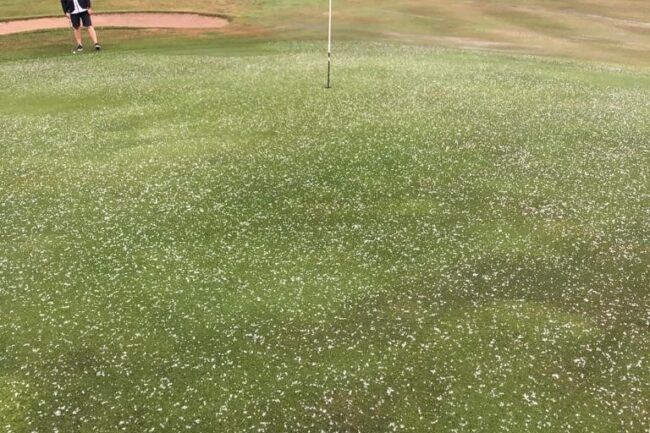