‘Your age is just a number’ or ‘There’s life in the old dog yet’ were never more apt than in relation to yesterday’s medal competition winner.

Fiona Smith shot an incredible 87-25=62 net, winning the competition by 8 shots clear of Hazel Deerness who had a 70 net.  Even though Deirdre Taylor racked up an 11 at the 11th hole, she managed to hold it together to take 3rd place with a 71 net.

Harburn’s Midway team were once again in winning form after the home match against Pumpherston.  The team of Janet Hardie, Meg Laidler, Deirdre Taylor and Annie Leitch had an excellent 4-0 win.

Harburn had to win the match to stay in Division 1……… and that’s just what Harburn did, beating Dalmahoy 3-2. Well done and thanks to everyone who played and supported the team throughout the season.

Finally, a huge thanks to Linda Boyle who, after a number of years is now stepping down as the Midlothian Rep.  Linda did a sterling job of going to meetings, organising matches and making sure everyone knew when and where they were supposed to be.  During her stint Harburn punched well above their weight, playing against Edinburgh clubs with strong ladies sections, and won the Midlothian League Division 1 in 2017 and 2018 which was truly a great achievement.

Thankfully the heavy rain forecast for Sunday held off and all players in Harburn Ladies Open Greensomes managed to get round relatively dry.

The conditions certainly suited the winners Dorothy Wilson and Sheila McEwan who had an excellent score of 78-16.4= 61.6.  Keeping it in the family, runners up were Elaine Wilson and Morag MacPherson (Murrayfield) who had a 63 net.  Third place on 70.2 went to Gail McMahon and Joanne Dymock (both Colville Park).  Janet Hardie and Iris Thomson (Ratho) took 4th with a 71.4.   The scratch prize was won by Aileen Kennedy and Jennifer Bryans with an 80.

Harburn also did well at Pumpherson on Saturday in their open greensomes.  Aileen Kennedy and Anne Stokes won the overall competition whilst Jennifer Bryans and Meg Laidler won the scratch prize 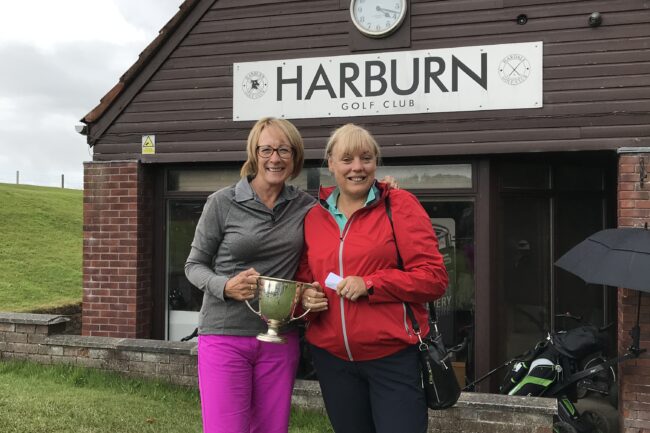 Aileen Kennedy took the top spot in Tuesday’s Spoon qualifying competition with an 80-12=68.  Runner up was Anne Stokes with a 83-12=73. It was sisterly revenge for Elaine Wilson who on 73 net, sneaked the 3rd qualifying spot over her sister Dorothy who had pipped her in Sunday’s competition!

Well done to all 3 qualifiers who will now have the opportunity to play in the Spoon final on Saturday 11 September.