What a treat it was for the spectators at the Ladies Championship and Handicap Final!

First out in the Handicap Final was Hazel Deerness and Cynthia Tuckerman.  Hazel built up an early lead and was 2 up after the 5th.  Cynthia played steadily but was unable to close the gap and Hazel remained 2 up after 9.  Hazel increased her lead to 3 up after the 12th but Cynthia played the 13th well and pulled the deficit back to only 2.  Hazel then won 15 to once again go 3 up and looked to be coasting to a victory as Cynthia didn’t hit her best drive at 16.  However, Hazel once again, ‘faffed’ around at the 16th and Cynthia won the hole to keep the game alive.  Both reached the green in regulation and with Hazel to putt first, she rolled it up nice and close for a ‘gimme’.  Cynthia’s putt just sneaked past and with the hole then halved, Hazel was declared the winner of The Handicap Trophy!

The Championship Finalists were Jennifer Bryans and Aileen Kennedy.  You could almost feel the nervousness in the air as both players only managed a bogey at both the first and second holes.  Jennifer took the lead with a sound par at the 3rd after Aileen missed a relatively short uphill putt.  Aileen came back with a good par at the 4th to go all square again.  Jennifer won the 6th but an excellent birdie from Aileen at the 9th saw the match back to all square.  The 10th and 11th were both halved and when Aileen left her putt woefully short at 12th, Jennifer secured her par to go 1 up.  Aileen sank a good putt on 13 for her par whilst Jennifer, who’d overshot the green with her drive, could only manage a bogey so it was back to all square.  Aileen then won the 14th to go 1 up.  Both players found the green at 15.  Jennifer rolled her putt close and secured her par.  Aileen had left her putt a couple of feet short and surprisingly missed the par putt so it was back to all square.  An awesome drive from Aileen at 16 saw her pitch close and sink the putt for a great birdie to go 1 up.  Both players opted to drive short of the bunkers at 17th but it was Jennifer who secured her par to bring the match back to all square.  At the 18th Jennifer hit a good drive straight up the middle of the fairway.   Aileen, who had been driving really well all day, carved her shot right and landed on the practice area.  Faced with a blind shot to the green, Aileen played an excellent shot on to the bottom side of the green.  Surprisingly Jennifer’s pitch came up short and also finished bottom side of the green.  Jennifer left herself with a 5/6 footer whilst Aileen putted pin high but 4 feet to the side of the hole.  Jennifer’s par putt narrowly skiffed past the hole.  All eyes were now on Aileen as she stood over the ball knowing that if it dropped, she was Harburn Ladies Champion and if she missed, it was up the 19th!  Thankfully for everyone’s stress levels, Aileen slotted the putt away and breathed a huge sigh of relief – she was the Ladies Champion again……………. after a hiatus of 19 years!!!

Commiserations to Jennifer and Cynthia and congratulations to both Aileen and Hazel which just goes to show you can still produce the goods……….even when you’re an OAP!! 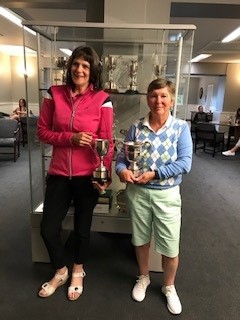 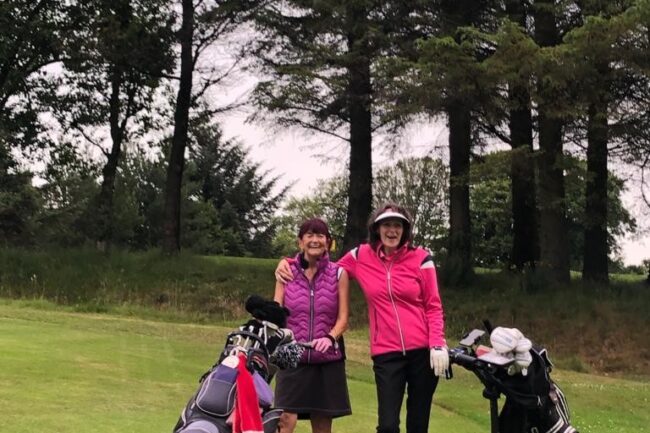